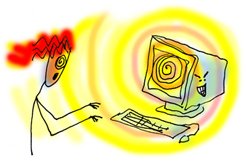 I made a comment on a post on facebook the other day to which someone took HUGE exception. She replied calling me names, making accusations, etc.

What I know about accusation is this: it tells me more about what a person is afraid of than it says anything at all about me.

The person who attacked me said I ‘created chaos,’ and that I didn’t ‘come from my heart,’ and that she was ‘out there doing the work’ while I was sabotaging it. Huh! Interesting!

I had to laugh, actually, because if she thought her attacking me was a good example of coming from her heart, she has lots to learn! And spiritual pride (I’m better than you because I’m doing the work….) will trip up her well-meant intentions every time.

I tried hard to find the chaos she spoke about, and finally realized it wasn’t really there – it was just how she perceived what was said in the replies to her post.

It seemed to me that if things weren’t all soft and gooey and lala, then it felt chaotic and hurtful to her. Sorry, not going to walk on eggs!

I had zero inclination to defend myself – it would have been like trying to sing a song in the center of a cyclone – a total waste of energy, because she would not be able to receive anything I said.

ATTACK! AND WHAT TO DO….

•  What do you DO when you’re attacked like that?
•  How do you keep grounded, level-headed and heart-centered,
…despite the intense energy?
•  How can you not be attacked in the first place?
•  How can you glide through…and actually even create and harvest…beautiful, clean energy from a sticky situation like that?

I’ll be going over exactly that in this week’s Money Tapping Group, because one of the biggest fears people have about being more publicly prominent is that of being attacked.

Know what my biggest fear used to be?

I just KNEW that if I got on stage or started getting out of my little isolated world, I’d be killed by some crazy person who thought I was the end-all-be-all of evildom.

Someone would stand up and say who do you think you are, or heckle me, or start laughing and say my information is bunk (I had that happen when I first started using and telling people about EFT!).

Guess what I don’t fear anymore!

How would you like to get over your own fear of attack, and feel strong, flexible and powerful? You can!

I’ll show you what do do first, what to say (or not), and how to turn that ‘negativity’ into power and creativity you can use immediately.

And…We’re going to continue delving into the second Chakra, which we started in the first group*.

CHAKRA 2: SEX, MONEY & CONTROL
The 2nd chakra is all about sex, money and control. Not necessarily sex in terms of the physical act – more in terms of the deep sensuality, the ability to feel and connect with others that is fundamental to every human being.

Did you know that if your 2nd chakra is blocked, it can be really hard to attract money into your life?

Why is that? Because the second chakra is all about not just reproduction and creativity, it’s also about your ability to connect with the world in a flowing, sense-ual way.

If your sense-ing is cut off, your ability to connect -whether with people, things or money – is limited in a major way.

A lot of women cut off their connection to the 2nd chakra in order to be safe in the world, and then feel dismayed by not being able to attract or create enough money, or be attractive to the people, things and income they want.

We’ll go over just what to do about all of that…and make some pretty astounding breakthroughs and new insights that will help you attract more of what YOU want in your life to yourself.

One of the Money Tapping group, who was pretty stuck even thinking about sexuality, is now starting belly-dancing lessons! What a switch!

WHAT ONE TAPPER SAYS:
“I’ve had fun interacting with others. I love the laughter and fun, your making light of things so there could be serious healing, with group and individual support.

“I really got that my ‘blocks’ are healable, I was clueless about the chakra 2 stuff. The dense fog around money is starting to clear. This has been profoundly healing for me. I’ve also had some unexpected ways money has come to me – enough to be spooky!

“It makes sense to me that a lot of my poverty (and auto-immune disease) has been associated with sex, shame and control/power issues.

‘I’m even thinking the physical disease could now go. That would be amazing!”
~ private caller

If you’re in a time zone when 6 NY time is your snoozy time, sign up anyway – you get the audios to listen to at any time you want. You can also join our Secret FB Money Tapping Group page. I so look forward to working with you!

Remember I love you!!!

Chakra 1 is all about creating your solid reality. Want to manifest more of anything? Stop manifesting something? Make more money, drop extra pounds? You’ll want to Get Part 1 now before you get too far behind!

* TAPPING: Don’t know about tapping? Here’s where to get…
How to do EFT: EFTBooks.com
Free demo: EFTinEveryHome.com
The points: TheTappingpoints.com
.