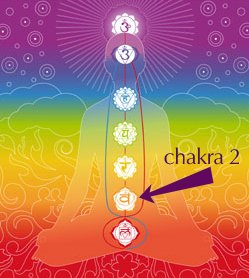 Think of the 2nd Chakra as a level of consciousness.

Whereas the 1st Chakra is all about your environment (everything you can physically feel) and your tribe, the 2nd Chakra, right in the groin area, is more fluid; the energy of it should be flowing naturally in and out of it easily.

The 2nd Chakra is all about money, sex and control.

The energy of the 2nd Chakra is about connection, flow, sensations…how aware people are of you…self-image.

Example: Some people control others by being needy (ever known anyone like that?) Know what the 2nd Chakra Vow is for that one? “I am my pain.” The identity is so closely woven in with the pain that if the pain were to go away, they literally think they don’t know who they are.

You can also think of people whose personalities are solidly wrapped up in their biz, and if you get them all alone in a non-biz setting they have no clue how to act or what to do….

The beliefs:
“I hide who I really am because it isn’t safe to be me.” Ever hear of anyone saying “it’s scary to market my work”? This is why – it’s too unsafe!

“You can’t get what you want, so you get the attention and goodies you want by being needy.” Squeaky wheel gets the grease.

Another 2nd Chakra Vow is “I’ll never let anyone take advantage of me again.” So everyone looks and feels like a possible predator. Think that might limit you a bit by shutting out the people who are truly not predators?

A few weeks ago I told you I was studying Wealth Maven Margaret Lynch’s wonderful 7 Levels of wealth Program. (I highly recommend her course: http://snipurl.com/wealth-tapping)

Well, in over 40 years of extensive energy, psychological and metaphysical training, I’ve never come across information like what she’s bringing to the table. I’ve learned so much I’m astounded.

When you go through traditional chakra training, you don’t hear that each chakra IS a level of consciousness, that you make vows that reside in your chakras, that those vows affect every chakra above it until the vows are cleared!

Do you put the needs of everyone else on the planet before your own, ending up frustrated, getting nothing of your own done, exhausted and worn out?

Have you ever thought: “All that law of attraction stuff is great – for others. But I never get what I ask for.” You’ve tried using LOA anyway – and got lousy results?

Has anyone ever told you that you dress too sexy? Or that you’re too brash, or forward? Or you’re ‘too much’? Didn’t that make you feel confused, or mad, or wonder what on earth they were talking about?

How many times have I heard this one: “I really don’t KNOW what I want.” It feels too scary to want (success, money, love, children, freedom….), so you’ve shoved wanting away, never to be found without massive digging!

They are all second chakra issues.

We make vows like “I’ll show THEM!” and “I’ll put everyone else first so I can feel safe.”

These vows ripple through your life, affecting every part of you and what you do.

Feel like you have unhealable issues? Ones that are ‘hard-wired’ and never can be resolved, like, “I’m so afraid of ____ and it never goes away, no matter how I’ve tapped or worked on it”? There’s a chakra vow in there that needs to be transformed.

I’ve really taken Margaret’s training to heart, and have since used this marvelous information to help a whole bunch of people get free from vows in their chakras that kept them confused, angry, bitter, broke, stuck and frustrated.

How would you like to get your own invisible vows freed up, too? I say ‘invisible’ because you’re so used to living through them you don’t even see them! Your conscious mind doesn’t know they’re there.

CLEAR UP YOUR LIMITING CHAKRA VOWS!
This week in the Money Tapping Group Part 2 #2, we  started to clear the major second chakra vows that have been keeping us from living the fullness of our expression, of our authentic Being.

If you’d like to join us, you can! You missed the last 2 calls, but once you sign up, you’ll get access to the audios, plus the 2 next calls and audios.

When you purchase Money Tapping Group 2, you get complete access to Group 2’s previous audio, plus you get to be on the next 3 calls.

You get to:
• participate live
• ask questions
• be tapped on in person
• get the expanded energy, love & support of the rest of the people in the group
• and get to be on our private FB page if you’d like.

Here’s where to read more and sign up:
http://EFTBooks.com/money-tapping

(You can also get all the audios for Money Tapping Group 1, which you’ll probably want to do, since we clear Chakra 1 – among other issues we cleared, plus I took everyone through some powerful extra healing tools and techniques.)

If you’re in a time zone when 6 NY time is your snoozy time, sign up anyway – you get the audios to listen to at any time you want. You can also join our Secret FB Money Tapping Group page.