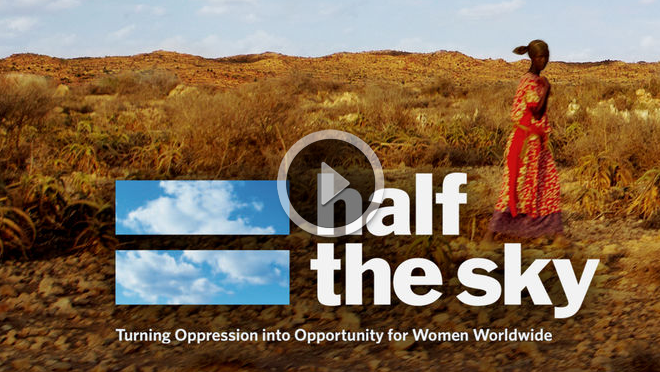 I watched a documentary last night called Half the Sky: Turning Oppression into Opportunity for Women Worldwide.

Ever hear of it? It’s also the name of a book written by Nicholas Kristof and Sheryl WuDunn, a NY Times reporter and his wife, also a writer for the Times.

In each of the two 2-hour segments, they carefully explore several very tough, very volatile areas of women’s suffering and abuse, and show great examples of what people are doing about it.

From sex trafficking to prostitution to female genital mutilation to women finally learning how to start their own businesses after years of degradation, beatings and even being tortured and killed by their own men.

Women whose kids literally sleep under the bed as their mothers ‘entertain’ their customers, assume they’ll grow up into the life of prostitution, and who never get an inch of education.

Not nice subjects, I know. I’d heard of and even seen footage of some of the things they showed, I was horrified anew.

But inspired, as well, by people like John Wood, who used to sell Windows for Microsoft, who started up and runs Room to Read (http://www.roomtoread.org), helping literally tens of thousands of kids in Viet Nam and other areas learn to read, and helping them go to school.

One of the amazing women who was interviewed was an older black woman in Somalia. She’d had a very high, very prestigious position at the UN. Her father was a well-known, highly respected doctor. She decided to take her own experience as a doctor and midwife home. So when she retired, she decided that she wanted to do something about the high rate of women dying in child-birth in her country.

After starting out meeting and beginning to treat pregnant women under a TREE because she had no office, that Somalian doctor has by now built her own magnificent hospital, trained local women in midwifery, and has lowered the mortality rate in her area to one-quarter of the country’s average.

I was so struck when she said,

“I’m so passionate about my work
I would die for it.”

No! You bet not! Because she doesn’t just believe in what she does or in herself. She KNOWS what she does is good, she KNOWS that she is good.

That’s how I want YOU to feel about what you do.

So when you get a chance, watch ‘Half the Sky’ by Nicholas Kristof and Sheryl WuDunn if you haven’t seen it yet. I found it as a freebie instant-watch on Netflix.

It was beautifully written, photographed and scored, with succinct, intelligent narration by George Clooney, and a score of influencial people like Hillary Clinton, Gloria Steinam, Ruchira Gupta (think creator of the bank in India that gives women microloans) and Desmond Tutu making intermittent comments…it’s a brilliant film.