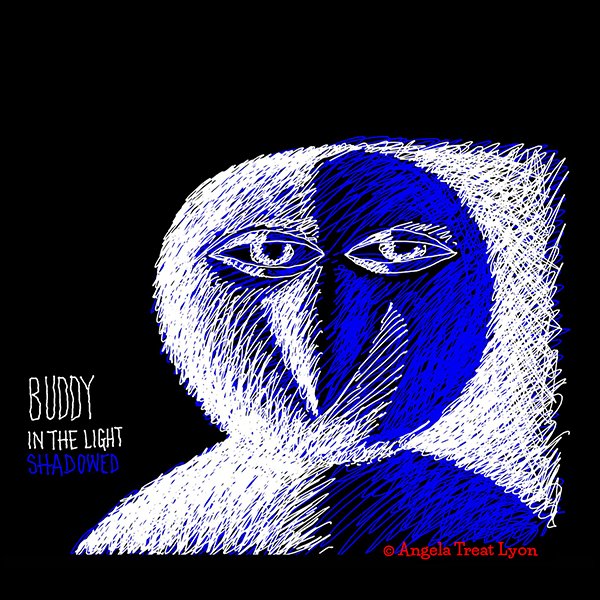 When I drew this, I was focusing on the white part so much that it wasn’t until later that I saw the funny blue face.

I particularly like this one because it’s so silly (Silly really ought to be my middle name), and so obvious … but not. It’s a great metaphor for my life – I go forward with stuff, and a lot of tangential events and other things happen, and it isn’t until later that I realize/see it.

And I like it, of course, because I love birdies.

I’ve always loved birdies. When I was a kid, we had an osprey nest on our land down by the pond, and I’d watch them for hours as they reinforced the nest, had their brood, flew off again.

In winter, my little brother and I would sit outside in the cold, sometimes as it was snowing, holding our sunflower seed-filled hands out, still as a frightened mouse, waiting for the chickadees to come down and feed off our frozen hands.

There’s just something about having the trust of a little creature that, although it looks substantial enough when it’s covered with fluffed-out feathers, weighs just about nothing and flits in and out, here and there, landing, hopping, chick-a-dee-dee-dee-ing right ON your body.

My brother got so good at it that he’d go out, sit down, and they’d just flock right around him. Me – not so much – I hated being cold, so I wiggled too much. He finally told me to go inside!

I had a birdie-feeder right outside my window at my last place in Hawaii. There were several species of birdies, each taking polite turns at various times of day, drinking, splashing, playing and bathing themselves. The last year I was there, it was devastating to watch as a neighbor cat demolished almost every bird. Finches and doves were his favorites.

Looking back, I think maybe it was a sign to get the hell outta there. Sometimes I’m just too thick to read the signs, though. One horrible event after another, each worse than the last, built up to the last straw, and I finally left in a blaze of energy.

The day I left was the first day of a huge hurricane. I departed out of Honolulu, and as we flew down to to the Big Island to catch the plane to the mainland, I could see the storm climbing up over the eastern ridge of the mountains, while on the airport side, it was clear and sunny!

When the plane took off for California, we juuuusssst barely skimmed the top of the clouds and escaped the storm. I heard later it was the last flight out.

You know how I know that, although I like my new place a lot, I’ll never stay for long? No birdies. In the 3 years I’ve been here, I’ve only seen one squirrel, and one jay. That’s all I’ve ever seen! Weird, neh? I need my wild critters!

What critters of the wild do you love? Do you ever consider them messengers, or harbingers, or maybe soul-spirits?