I get really annoyed when I hear anyone say, “I can’t.”

Because I know for a fact how real the immense possibilities open to us human Beings are.

From what I’ve seen as a Success Coach, there is just no end to what we can do, and to cut yourself off from possibility by declaring you-can’t is like amputating an arm to spite yourself.

My parents used to tell me “there’s no such word as I-can’t.” Rebellious sort that I was, I spent all of my childhood refuting them, saying that very set of words probably more times than anyone in the history of man.

Later, I slowly realized that I-Can’t must be turned into I-Shall, and then I-AM, unless I wanted to continue living an abjectly miserable life: I used to cry myself to sleep every night because I was so terrified I’d die in my sleep. I believed that when I died, I’d be Gone. Nothing left. Nothing.

I hadn’t a clue about energy, afterlife, reincarnation, Spirit – nothing. So when I found the book, “The Robe,” the story of the Roman Centurion who held onto the robe Jesus wore and how he became filled with light, it was as if  brilliant light had come on in my own head. A long, long search ensued from there, because I found and also wanted to know about the Old Masters, St. Germaine and all the mystics and Yogis….

But despite my intense search into the various religions and meta-physical areas – astrology, the Tarot, Theosophy, Holographic Repatterning, Filipino Psychic Surgery, HUNA and all the other esoteric, healing and tribal disciplines in which I have trained – I wasn’t really able to get under the depression I felt every day to disable it until I learned how to use energy solutions.

It was the combination of

feeling how I feel, tapping on the meridians of my body and saying the thoughts in my mind that did the trick. It was like a miracle had plopped itself into my life out of the blue, allowing me to integrate emotions, mind, body and spirit.

Within 6 weeks the cloud of black that had hung over me for 35 years had changed to a lightness I barely remembered feeling in my teens – I felt happy! What a concept!

Part of this new, amazing feeling was finally being able to think, say and feel that I really did completely love and accept myself – I had been utterly unable to even think that at first – it was unimaginable to me. 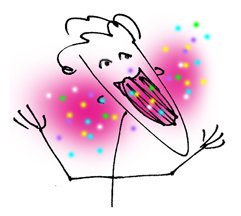 But the biggest thing was finally understanding that the words I say to myself every day are the platform upon which I build my life; they are the inner script, the inner story I adhere to even in the midst of complete chaos.

Whereas before, my words were depressive, draining and debilitating – and even sometimes maniacal – now my words entertain me, feed me, educate and inspire me, and give me the ability to hold onto my vision of a great reality, no matter what.

So one of the things I do first and foremost when I work with my Success clients is to help them really get what their words are doing to their lives, and assist them in commiting to training that balking, ornery bull within called the mind to be their servant, rather than their master. Because if they keep insisting on going back to the past and rehashing situations, gripes, hurts and resentments, there is absolutely not one inch of room for anything new, better or more satisfying.

I give them the simplest homework assignment:
1. Make a list of all the things you hate or dislike, that rattle you, upset you, make you feel bad. Every last thing you can think of from any corner of your life, about anyone, any thing or any place.

They do that over a period of about 3 weeks, because new ones leak to the surface over time.

Then, I have them go over the whole list and write down the exact opposite of the items on it. “I hate being broke” becomes “I adore being rich.” “I hate marketing” becomes “I love talking to people about my passion.” Even if it isn’t really true for now. And because of course it isn’t true yet in most instances, I have them tap on it until it feels right to say! (Don’t know about tapping? http://EFTBooks.com – try it for free.)

And instead of allowing them to keep predicting their gloomy future, I have them learn this one little phrase: “Something amazing is about to happen.” It puts them into a state of expectatiion, being on the lookout for amazing things. So much better than the same-old same-old, “It’s the end of the month and I can’t pay my rent!” or such like.

By the end of a month – yes, with other exercises and easy disciplines that I show them – their minds are beginning to get it, and it’s easier sailing from then on. They are now the captains of their ships – their minds no longer the acting captains but 1st Mates, where they belong.

If you haven’t done that little exercise (exorcise!), I invite you to give it a go. You’ll be blown away by the amazing things that come to you suddenly, out of the blue and with no warning at all! They’ve been waiting for you all this time, waiting for you to open up and be able to receive them. Something amazing really IS about to happen – if you’ll open up to not knowing what it is, appreciate the energy of tension you feel, and allow whatever it is into your sphere of reality.

It’s the ultimate choice. It’s THE Choice that we must ultimately make – whether coming from a religious, esoteric or completely mundane background. Every single one of us has the choice to taint or enliven our lives with each and every thought, word and action. It’s a very big deal.

It’s easy to say, “no such words as can’t,” to your kids. But they need to understand why – what’s the key concept under your motive for telling them that? Maybe if my poor beleagered parents had been able to explain how words make up our lives in their attempt to help me train my mind so I could build a beautiful reality, perhaps I’d have done differently.

But YOU have the choice, and now you KNOW you do. So – what are you thinking?