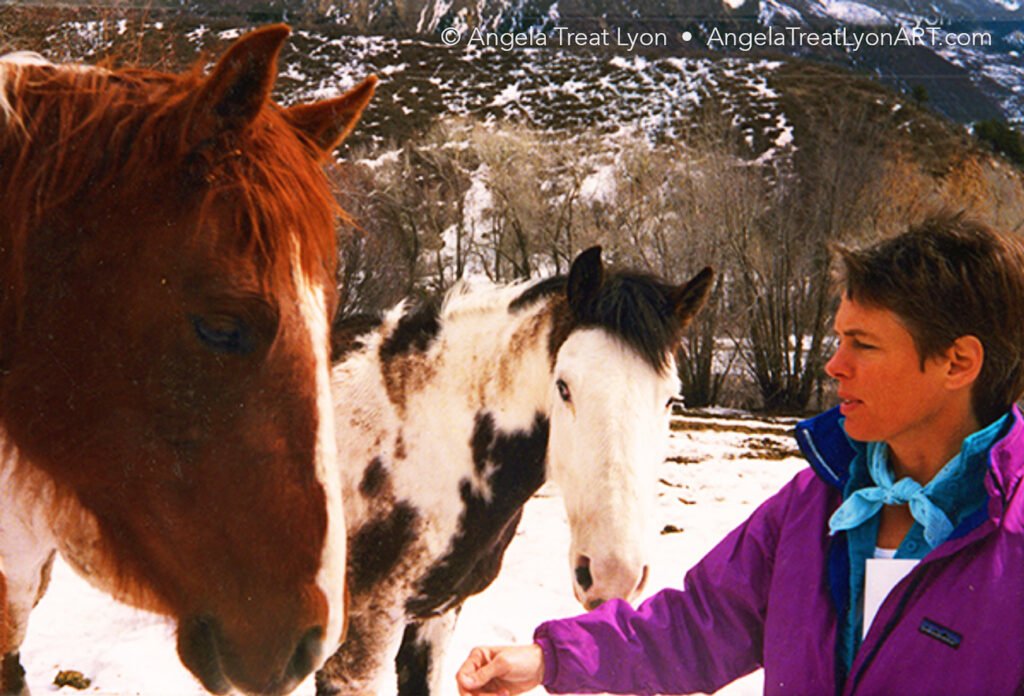 In the mid-80s, I had been living in Kailua, on Oahu, in Hawaii. I had a nice house, drove a Volvo station wagon, had a simple carving studio, enough to eat…but I was unhappy.

And I couldn’t figure out why. So I sold everything I owned except for a few favorite things, sold my car, and hopped on a plane to San Francisco where I had friends I could stay with.

I bought a brand new Toyota Forerunner (one of the first ones, ever, without the back doors – boy did I come to hate not having those back doors!), some camping basics. I set about going on the road for as long as it took. I wanted to do an enforced ‘art fast’ to see if making art was ‘really mine.’

Is art really mine?

I wasn’t fully convinced that making art wasn’t something I stuck to out of habit because my ma used to shove me in the corner with pencil and paper when I was little to shut me up and keep me occupied.

I drove the busy freeways, local highways and lonely back roads, and got lost and stuck in the mud on scary non-existent tracks – in and out of every one of the 12 western states, and up into parts of Canada, in my pickup truck.

I had the most minimal collection of belongings I could exist with – a file box for my clothes and a wooly winter jacket, a box for fire-making tools, small pieces of firewood and my hatchet and an 8″ flat grill, and a cooler. And a sleeping bag. I finally bought a tent the last summer so I could keep the skeeters away so I could sleep at night.

I vowed to not allow myself to do any art at all unless I knew without a shadow of a doubt that it came from That Deep Place Within that I knew real art comes from.

My adventure came to an end in December of 1988, after 2 years of gypsying around.

I was camped next to the little river at the Mt. Sopris campground. I awoke one morning to 2′ of snow completely socking me in. That was it for me – I’d lived most of my life in Hawaii, and the temperature outside was 100 degrees less than what I was used to!

I hastily rented one of the little one-room, non-insulated summer cabins at Avalanche Ranch in Redstone, Colorado, right up the road from my campground – anything to get out of that snow!

Looking out the front door of my cabin, these two friendly beings would be waiting for me every day. Lucky me!

In January of 1989, in only one afternoon a blizzard dumped multiple feet of snow outside, totally covering my truck and obliterating any tracks or paths. I watched as giant icicles formed so fast that by nightfall it was like looking out at jail bars over the window.

I sat there that day, hunched over in my rocking chair, knees knocking and teeth chittering, feeling like I was going to freeze to death – even though I had practically all my clothes on, even though I was sitting right in front of the wood stove blazing its little heart out.

At one point, I found myself absently gazing at a hunk of kindling. I suddenly realized that I had been mentally carving that piece of wood.

It was at that very moment I knew art was ‘mine’ – if I can be freezing my ass off in the middle of winter in a blizzard dumping foot after foot of snow outside, in a frigid summer cabin with 8-foot icicles outside the windows, still thinking of carving?

Yep. It was mine.