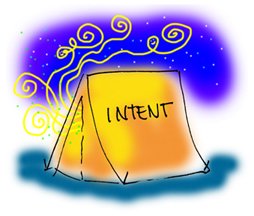 I may be an opinionated old thing, but to me, the phrase, “Maybe it’s not meant to be….” is pure BS.

“Maybe it’s not meant to be….” smacks of the mindset of someone who is convinced there is some higher power controlling them, and if they stray onto some path not “right for them,” it won’t work out.

Yes, I do believe in a higher power that is way beyond what we could imagine. But still, I don’t believe whatever that power is controls every little thing I do! Free will, anyone?

Thinking “maybe it’s not meant to be….” removes the possibility of choice.

If I buy into something I’m doing not being meant to be, then I have no choice but to give up. If I try to find another way, some part of my mind will sabotage it, thinking that maybe it’s not meant to be.

What the hell happened to Radical Intention?
Where nothing will stop you, no matter what?

Surely you have heard of people who just never gave up, right?

Or have we just given in to the slave mentality that we ‘better behave,’ we ‘better walk the straight and narrow,’ we ‘better stop doing whatever it is that isn’t working because if we try any further, what will happen?’

Oh no! Will we get punished? Laughed at? Shunned?

Ohhhh, nooo! We can’t FAIL! Better to give up than get punished, laughed at or shunned! Right?

WRONG! If one thing doesn’t work out on your path towards contributing to the world, try another way!

Don’t give up so damn easily!

I heard someone saying just last week, “well, it didn’t work out, so I’m considering dropping the idea.”

Try whatever it is again – at least three times –
before you give up!