I worked with a friend live on Skype today who was panicking so intensely that she was literally choking.

Afterwards, I was considering how none of the things an energy practitioner would normally say with a client would have worked with her.

You know – ‘it’s just energy, you’re afraid of speaking your truth (throat stuff usually is), just tap on it, maybe it’s because your mom did this, maybe it’s that this or that happened when you were a kid, let’s transform this into power’ … nope.

None of that seemed Right to me. So I just stayed present with her as she cried and cried and coughed and coughed, and even wretched a little. It just seemed like something that was Not Her wanted to be expelled.

I’m never quite sure where the information that comes to me during a session comes from – I don’t usually ask, because it’s pretty special and sacred to me, and certainly doesn’t come from my Little Bitty Me-First Mind!

So after we hung up, I sat in awe as I contemplated the wisdom of what came out of my mouth to her today, and how fast she moved from complete nauseating panic to feeling calm, and even laughter. (Scroll down in this article to see the ghost-like effect that I captured using screen-shots!)

Now, I’m as ready to say “it’s old stuff” as anyone else, so this is not a criticism, but rather, a reminder – that we’re like little pieces of driftwood in the enormous river of life – so of course there’s going to be stuff, energies and feelings that aren’t of our own conscious creation.

It’s really easy to say to someone who is suffering that ‘it’s old stuff, it’s your ego, it’s…whatever…’ – but we tend to forget sometimes that we can feel what others in the River are feeling, and experiencing; and we may even take others’ energies and emotions right on into ourselves without realizing it.

I think we need to be more cognizant of that, and remember to ask ourselves, “Is this mine?” And if it isn’t, be ready with ways to handle that situation – like tapping!

Sometimes it’s best to simply breathe and be kind to ourselves. And even then, sometimes the energy is so very intense that it’s hard just to remember to breathe! 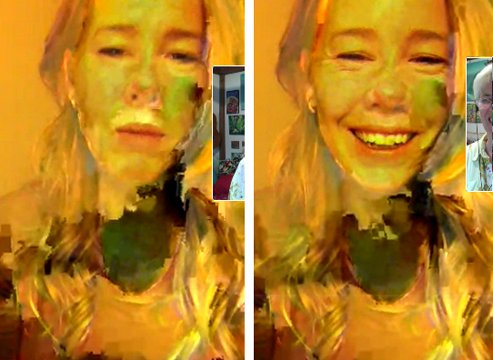 At the end of our time together, something really marvelous happened. I suggested that she ask the legions of angels who she said were hovering around her to send help to the group of people who had bullied her, because they must be in such pain to act the way they did towards her.

As soon as she did that, two things happened simultaneously. She said her own fear completely dissolved in that instant, so she felt like her cells were melting…and she began to dematerialize on the screen! She literally disappeared, all except her eyes and mouth!

As I exclaimed and told her what I was seeing on the screen, her image partially reformed (see image to the left), but I could still see right through her. When I suggested she sit up straight and fountain energy up her spine, the clarity of her physical body image came right back again!!!

Now, I’ve seen Skype play imaging ricks before, but never like this! I really don’t know , but I believe she was in such a state of purity and compassion she simple became formless. I felt so privileged to be a part of her experience!

Whew! I guess I’m still a bit wheeling from that experience – I felt really honored to have been part of her transformation from panic to peace.